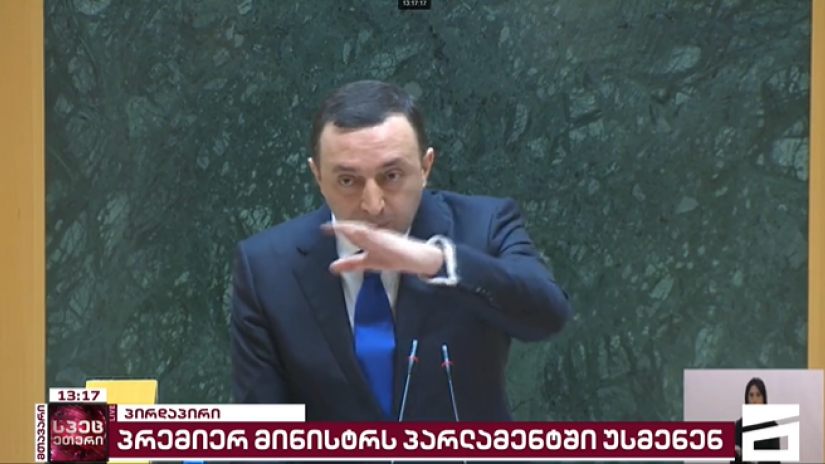 During an interpellation in Parliament, Prime Minister Garibashvili once again accused the opposition and representatives of the Ukrainian government of trying and wishing to open a "second front" in Georgia. According to Garibashvili, this was the reason for the demand to send Georgian fighters to Ukraine and the protests in the spring demanding his resignation:

"We are not a member of NATO and not a member of the European Union. We are occupied, and the Russian army is here, and they are coming out in the street. They did not like my decision and why? they chartered planes and sent volunteers from here to fight and they had to give permission to the government, that's all. The attempt to engage in direct war was counting on the fact that Russia's reaction would be adequate and a second front would open in the country, as they and their partners in Ukraine announced.

Their ideological partners are the representatives of the Ukrainian authorities, I will not list any more names, they mean nothing to me. We know their declared goals and objectives. Their task, they openly said that they want to open a second front in Georgia. This is not a speculation, an interpretation or a made-up legend. I quote what they said at the press conference. These people are their allies. If there were these people in power today, that is, representatives of the Ukrainian government and their allies, who wanted to open a second front in Georgia, I would like to ask any of our citizens - do you have any doubt that there would really be a second front here? And will they turn our country into a warzone? They're not in power, and they're doing everything they can to be a second front, and if they were in power, they would end up ruining the country, surrendering it to Russia, and the country would lose its sovereignty. They did and have done it, holding rallies, demonstrations, demanding the resignation of the government," said Garibashvili.