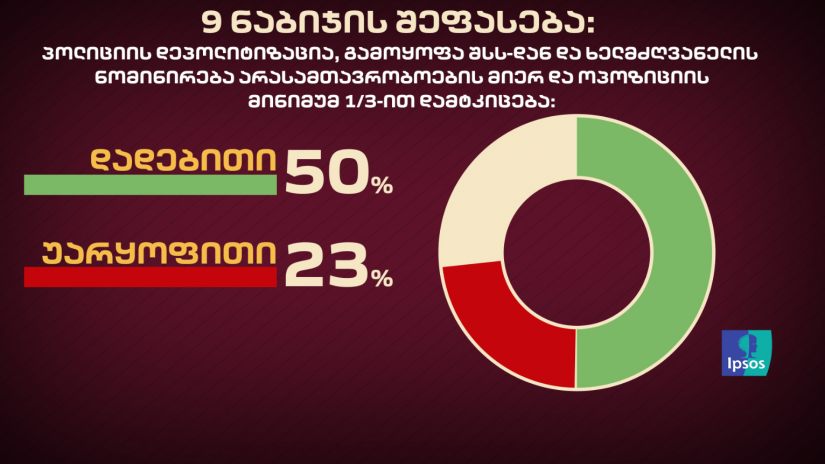 The French company IPSOS carried out the second poll commissioned by the "Mtavari  Channel" a few weeks before the elections.

It should be reminded that 'UNM-Strength is in Unity candidate' for the post of Prime Minister, Mikheil Saakashvili published a list of reforms he plans to implement in case of victory. 9 steps to justice - this is the name of the list of reforms.

Answers were distributed as follows:

To the question: How would you assess Mikheil Saakashvili's statements about 9 steps towards justice, mistakes made, apology, and return to Georgian politics? - The answers are as follows:

The attitude of the respondents to the step regarding the transfer of the key for  wiretapping  to an independent court and the Public Defender: was as follows:

Abolition of financial police and decriminalization of economic crimes

Full independence of the Bureau of Expertise

A fundamental change of the judiciary with decisive involvement of the non-governmental sector, reform of the Council of Justice, foreign judges in higher instances:

Depoliticization of the police, separation from the Ministry of Internal Affairs and nomination of the head by non-governmental organizations and approval by at least 1/3 of the opposition:

Separation of the penitentiary system from the Ministry of Justice, the nomination of the head by non-governmental organizations, and approval by at least 1/3 of the opposition

Depoliticization of the Council Office, splitting it  into two independent agencies, the nomination of leaders by non-governmental organizations, and approval by at least 1/3 of the opposition

Besides the positive and the negative, the rest of the answers was neutral, or the respondent did not answer or had no answer.

IPSOS conducted a pre-election poll commissioned by the Mtavari Channel in the period from September 23 to October 1. In total, 1500 respondents were interviewed all over Georgia. The margin of error is + -2.5%.

The information stipulated by law is published on our website mtavari.tv in the section "Elections 2020".