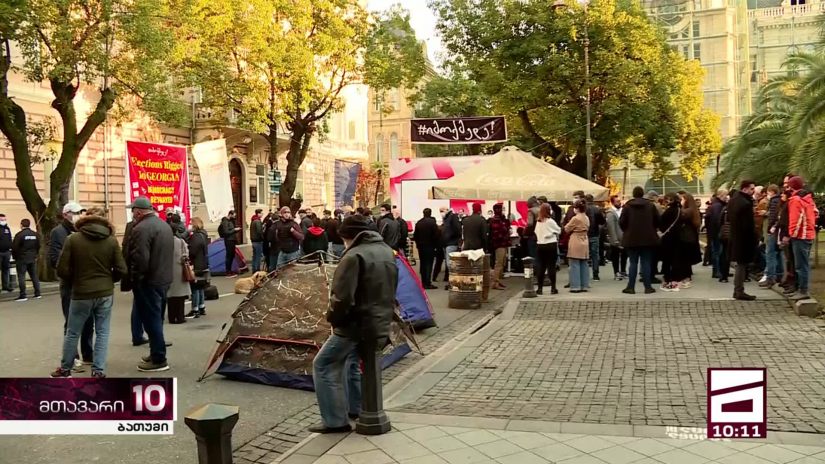 Batumi remains one of the epicenters of the opposition protests, where tents have been set up near the Government House for more than three weeks. Opposition supporters are protesting the rigged October 31 election in this way. According to the protesters, the protest will continue until they reach the final goal.

A monitor installed near the Government House of Adjara also showed the trial related to the case of 5 members of the organization "Alternative". They were administratively detained during a rally in front of the Batumi District Commission on November 21 and released on bail. The case is not over yet.

"We express our solidarity with the five members of Alternative who are going to be punished with administrative fines or imprisonment. Since we are supporters of the opposition, they are sending their activists to provoke us, they want to disperse us, but we are not going to disperse," - said the member of "Alternative", Juna Bakhtadze.

According to the members of the opposition, a large-scale protest rally will be held in Batumi on Sunday, November 29, at 15:00.

"On Sunday the 29th, at three o'clock, there will be a larger rally where we are waiting for the people of Adjara, who think that the people of Adjara were robbed of their votes by the members of Bidzina Ivanishvili's commission," - said Elguja Bagrationi, a member of the United National Movement.

The demands of the opposition are unchanged, they are protesting against the October 31 elections, they are joined by members of the newly formed organization "Act" and "Do not Give Up", whose main message is not to give up the rigged elections.