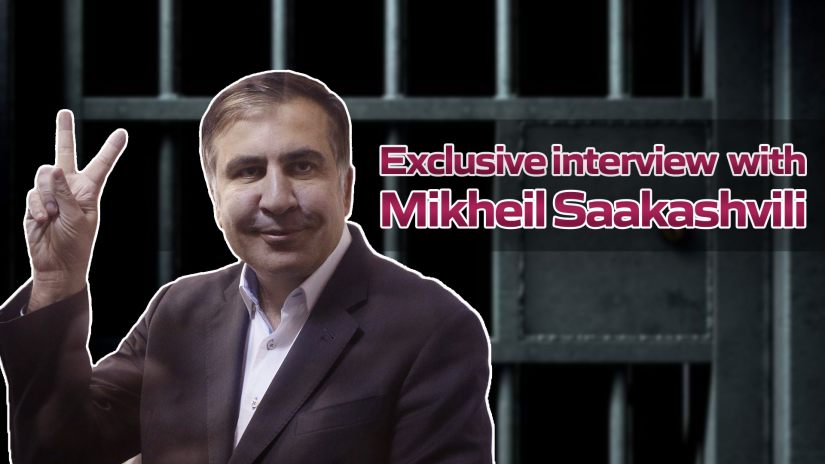 Exclusive interview with Mikheil Saakashvili - the third president of the country locked in a prison cell who has been on a hunger strike for 13 days, is answering the questions of the "Mtavari Channel".

Our journalist Tea Adeishvili asked questions to Mikheil Saakashvili on all current topics, especially his arrival in Georgia, imprisonment and political plans. We received the answer from the third president today.

The extremely difficult and life-threatening journey from Ukraine to Georgia,, the goal of returning to the homeland and the first emotions he felt after arriving in Georgia, the political goals and objectives for which he endures imprisonment and self-starvation and does not give in to his main enemies - Putin and Ivanishvili. Tea Adeishvili also handed a personal letter to Mikheil Saakashvili.

1.The story of your arrival in Georgia is the story of a great comeback, because only a great comeback can change reality so lightning fast. Was your arrival in Georgia a pragmatic decision by the third president of Georgia, who felt that the political process needed his participation, was it an emotional and heartfelt step taken by Mikheil Saakashvili, tired of longing for his homeland?

First, it was an overwhelming, boundless longing. Every night I dreamed of different places in Georgia, Pekini Street, Rustaveli, Vera and School 51, First Experimental School, Borjomi, Batumi, Anaklia, Gagra. Second, it was a rational, long-thought-out conclusion when I look at demographics, geopolitics, the collapse of domestic institutions, and I think we were already moving into a zone beyond this line, from which it would be impossible to return.

2. How long have you been preparing for your arrival? I understand that an investigation is underway and that you can not tell us everything, But from what you can, tell us how you made it to Georgia. Was it a big risk and discomfort, how long was the journey, what were you afraid of?

I have been preparing for a long time, this was not my first attempt at my return. Everything did not turn out exactly as I had planned, something was done in such a way that the first attempt almost ended tragically. Overall, this was not a business class voyage, nor was it what is now being described in the media.

3. Everyone who has seen your return to Ukraine imagined your arrival in Georgia to be something akin to it — a demonstrative crossing of the border, surrounded by supporters of Saakashvili, with commotion and as kind of political spectacle. However, the opposite happened. An entrance with secrecy and stealth, why? Did you take the risk? You did know that this is a country where the first president of Georgia, Zviad Gamsakhurdia, was killed precisely because he did not leave politics and returned to his homeland from exile. Your arrival is being compared to the return of Zviad Gamsakhurdia, do you see this parallel?

I did not risk because in that scenario it would be very easy to shoot, blow up, kill and then blame everything on us. Since the 90s, I have thought a lot about Zviad in Khibula. Yes, I have some self-identification in the sense that I have always tried to imagine myself in his place and I have suffered so much for this abandoned president who brought us independence. I would not draw a direct parallel with my arrival. I came because I wanted to come, and I could not do otherwise, and I think this is really a critical point in our history.

4. Your video address made in Batumi changed the political landscape of Georgia. It seems that before the release of this video, the “Dream” government  had no idea that Mikheil Saakashvili had returned to Georgia and the manhunt started only after that. Why did you decide to make this post public on October 1st? Why not, for example, on election day, which could have been even more confusing for the government? It is impossible for you to not have known that sooner or later you would be caught, and it is impossible to believe that you have not considered it.

When I made it public, I knew that the recordings removed from the cameras would quickly find us because most of the cameras are in the area where I was taking the videos.

I visited several places in Batumi, Kutaisi, Poti, Lanchkhuti, Samegrelo. I even had some Lobiani in the Rikoti and I ordered Khinkali before being arrested, and unfortunately I only managed to eat 1.

6. Three people have already been sentenced to pre-trial detention for facilitating your return to the country. What would you say to them and their families?

These people are victims of great injustice and will soon be released. This country stands with such people.

7. How is the feeling when your mother and children see you behind bars?

It was a very warm meeting, in fact — it ws of fellow fighters.

8. What does Saakashvili in prison mean? Do you think that if you, as an opponent of Russian politics and a successful politician, get out of prison soon, it will be an example and a threat to Russia, both in our region and in strengthening democratic forces against the Putin regime... And if Ivanishvili is a performer of Russian dreams, then for these reasons may he keep you in jail for a long time?

Yes, I think that cases against mere were filed after I was appointed governor of Odessa. That was ordered by the Kremlin. Moscow was very irritated by the fact that the Odessa region was super strategic for them and I became a big obstacle in their way. Now, if the Georgian people are active, Moscow will not be able to veto my release.