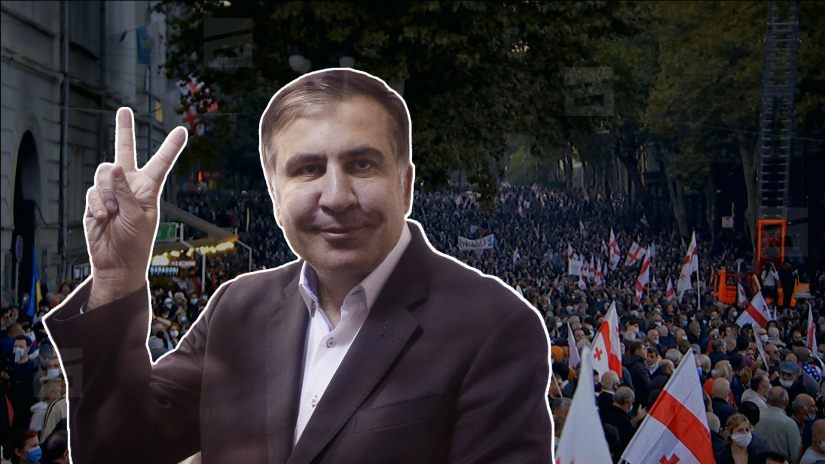 "Enough failure, surrender and nihilism ... everyone to the elections on October 30!" - At the rally on liberty Square, Mikheil Saakashvili's written address from prison was read by the CEO of the Mtavari Channel and his lawyer, Nika Gvaramia:

Nino Nakashidze
Greetings from my solitary cell. I would exchange the rest of my life to be with you now, were many thousands of compatriots from whom I am only a hands' length from are assembled, but I still cannot join you, not yet. My first wish and main wish is for the Georgians to have a state, distinguished by freedom and prosperity, justice and security, the ancient Europeans should have a European country, we should go to other European countries as tourists, to study, to do business, but we should always return home as I returned home.
Why am I in Georgia now? I am here because I cannot be happy even in Ukraine which I hold dear, I cannot be elsewhere when I see so much cruelty and misery in my beloved homeland.
I cannot watch without emotion how people are fleeing our country and how the most talented, hardworking, and decent people in Georgia are all gone. I cannot be a spectator from the side of the destruction of our homeland, I prefer death to that, that is why I am here. I am here and I am determined to stay and thereby contribute to the defeat of the regime, to the struggle of the Georgian people against poverty, against corruption, against injustice, against destruction. Let us stand together with the Georgian people against the Ivanishvili regime, which is dragging our homeland into Putin's Russia.
We must not let this happen, and we must put Georgia back on the path to the West, turning it into a beacon of democracy, reform and development. Let us pass through the darkness, poverty, injustice and destruction that Ivanishvili's dream has brought. For that, we must all unite inside and outside the country. This is not the time to be divided along any lines. Not along party lines or on any other grounds. This is the time to liberate and save Georgia, and unity is most needed today.
It is very important to realize that our society and country need great reconciliation, and we must be ready for that. Furthermore, it is vital for the country to stop humiliating each other and spreading hatred towards each other and to forgive each other. I am writing this from a prison cell, as an illegal prisoner, but outside I will act in this spirit. Another series of revenge and hatred will morally destroy our society and ultimately destroy our country. We have big changes ahead of us, but for that we must forget all grievances, put aside the burden of our negative emotions, because without getting rid of it our country will not be able to move forward. A society angry at each other has never set its own country on the path of progress, has never created anything valuable, and has always been defeated by its own anger and aggression. A civilized country cannot be based on strife.
And if we want a civilized country, then we definitely need a great reconciliation and a rejection of revenge and hatred. Enough of failure,no more indifference and nihilism! Everyone should go to the elections on October 30!
Let's defend each vote and then celebrate together the victory of Nika Melia in Tbilisi, the victory of Khatia Dekanoidze in Kutaisi, the victory of Giorgi Kirtadze in Batumi, the victory of Anzor Melia in Zugdidi, the victory of Davit Kirkitadze in Rustavi, the victory of Gigi Ugulava in Poti, the victory of Koba Nakopia in Senake, the victory of Giorgi Botkoveli in Telavi, the victory of Ioseb Buadze in Khashuri,the victory of Nikoloz Akhalkatsi in Kareli, the victory of Giorgi Robakidze in Baghdati, the victory of Zaza Metreveli in Tskaltubo, the victory of Temur Janashia in Martvili, the victory of Beso Shengelia in Khobi, the victory of Giorgi Kharchilava in Tsalenjikha, the victory of Badri Karchava in Chkhorotsku and our victory in Georgia!
We only need to take one final step to end Ivanishvili's regime, this Carthage of lies, evil and oppression will surely be destroyed. Darkness will be replaced by light, evil will be replaced by good, God be our protector, With your great love and unshakable belief in victory, Mikheil Saakashvili ".