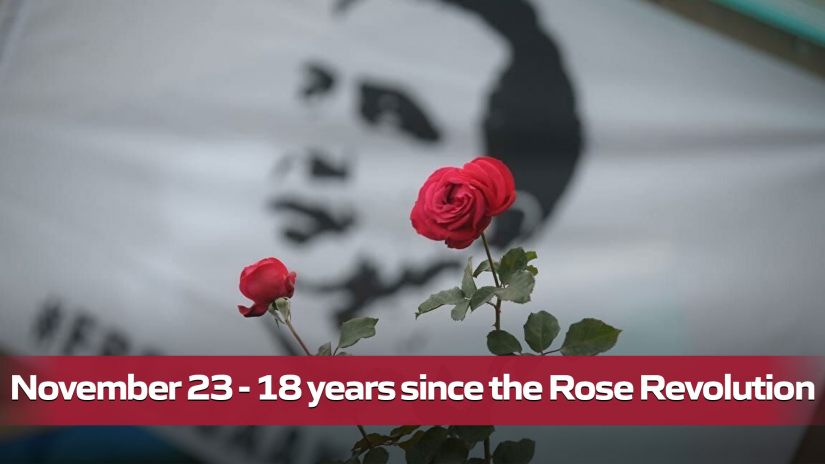 The Day that Nation Building Began - 18 years have passed since the Rose Revolution of 23 November 2003.

What happened in November of 2003 in chronological order:

Parliamentary elections were held on 2 November, which were rigged by the country's second president, Eduard Shevardnadze, and the then ruling Citizens' Union, while the ruling New Georgia bloc, comprising the Citizens' Union and "Resurgence", won.

The same evening, according to exit polls, the United National Movement celebrated victory. Simultaneously, the Fair Elections NGO was counting the votes. The results showed that this electoral entity crossed the 7 per cent threshold:

By this time, the CEC had counted only one sixth of the votes, with the ruling bloc (27.6%) and the National Movement (23%) leading.

On the same day, data from observer organisations, including the OSCE, became available on election irregularities. The only exception was a group of CIS observers who, according to preliminary assessments, described the elections as fair and democratic.

The Burjanadze/Zhvania bloc conceded victory of the United National Movement in the elections, while the UNM itself started talking about possible protests.

The first protest took place across the country on 4 November.

Saving a country that has fallen into a swamp was the goal that was achieved 18 years ago. The opposition and the population took to the streets to defend their votes and, more importantly, the development of the country and its prospects for the future. They have also moved to the capital from the regions.

All parties that crossed the 7 percent threshold gradually joined the rallies. They refused to enter parliament and joined the demonstration. They demanded that the government acknowledge the victory of the opposition.

On 13 November, the leader of the United National Movement, Mikheil Saakashvili, announced that he was no longer going to negotiate with the government and that the resignation of the Georgian president was the only demand for the rallies. The opposition began collecting signatures to this end.

Non-governmental organization ISFED, along with the opposition and the public, remained dissatisfied with the results of the elections. The US State Department also issued a statement saying that the announced results did not reflect the will of the Georgian people.

Despite the protests and critical statements by the international community, Eduard Shevardnadze still scheduled the first parliamentary session for 22 November.

On 21 November, opposition parties organising protests gathered supporters from the regions in Tbilisi.

The bus from Tsalenjikha was travelling ahead of the convoy with Mikheil Saakashvili in it.

Opposition supporters entered Tbilisi on 21 November and stopped in Freedom Square. The opposition announced the start of a "velvet revolution".

At the same time, pro-government protesters rallied in front of the parliament building.

On November 22, as the first session of parliament opened in the legislature, Mikheil Saakashvili marched towards parliament with roses in his hands, along with protesters.

Mikheil Saakashvili entered the parliamentary hall with his supporters and called on Eduard Shevardnadze to resign, after which Shevardnadze left the hall escorted by bodyguards.

At the same time, opposition supporters are present in the chancellery. Protesters also unfurled the five-cross flag over the government administration building.

The second president of Georgia, Eduard Shevardnadze, met with opposition leaders on the evening of 23 November, the 21st day after the protests began. The meeting was hosted by Russian Foreign Minister Igor Ivanov.

The president's resignation was followed by the resignation of other officials, including the Minister of the Internal Affairs.

Demonstrators gathered on Rustaveli Avenue and Liberty Square to celebrate the victory:

On November 24, Mikheil Saakashvili declared an end to the civil disobedience campaign and Acting President Nino Burjanadze lifted the state of emergency imposed on November 22.

Soon afterwards, on 4 January 2004, presidential elections were held in which Mikheil Saakashvili won almost 97% of the votes. A repeat parliamentary election was held in the country on March 28. The National Movement-Democrats won 135 seats of 235 in the legislature. 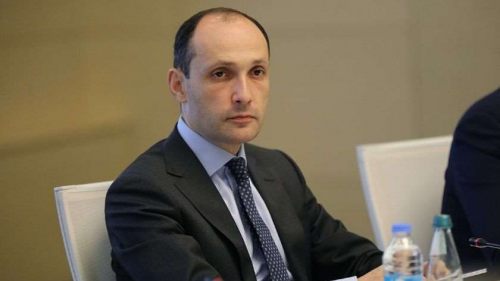