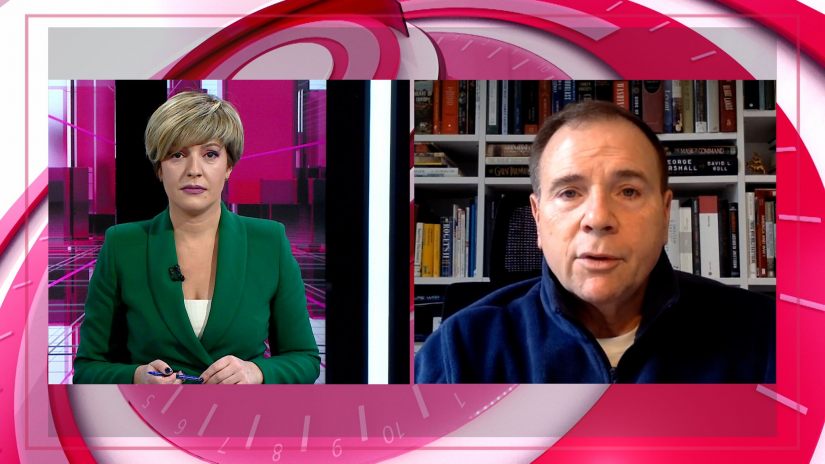 War is likely to start after the Beijing Olympics," General Ben Hodges suggests in an exclusive interview with us.

The former commander of the European Command of the US Armed Forces, now in Germany, says bluntly that war is inevitable and will start provocations and cyber-attacks before Russian military operations.

As for Georgia, it should at least exchange intelligence with an allied and partner country.

What will happen after such a harsh response from the West, and more specifically the US, will Russia strike Ukraine and why?

"Unfortunately, I believe that a new aggression against Ukraine is inevitable and will happen as soon as the Beijing Winter Olympics are over. I don't think it will be a massive attack, but we will see a series of smaller attacks that will not lead to large casualties. At the same time, Moscow will try to go beyond certain threshold and thus hope that some European countries will not see fit to impose sanctions."

Is Putin going to arrive in Beijing on February 4, or do you think the Olympics will set the date for the start of the war? We Georgians know very well how Putin used the 2008 Olympics.

"President Putin and President Xi Jinping have expressed support for each other in recent months. They have supported each other in their illegitimate demands, be it Crimea, the South China Sea or Taiwan. The two men are clearly helping each other. They are not allies, but ties are real. I don't think Putin will do anything to damage the Beijing Olympics, in which the Chinese are investing billions. Don't forget that Russia occupied Ukraine a few days after the Sochi Olympics. That is why I think time is of the essence.

Ukraine is now receiving unprecedented military aid from the West. An aircraft with a large amount of American weapons has flown through Germany to Kiev, the UK, the Czech Republic, the Baltics are helping Ukraine, does this complicate things for Russia and to what extent? Ukraine is already a big country, with a good army and weapons and war experience, and if Putin still doesn't stop, there probably wouldn't be an easy walk for Moscow.

"It is true that many European states are now helping Ukraine with arms and equipment and also expressing diplomatic solidarity to send a signal to the Kremlin that Ukraine's sovereignty is a priority, but I believe Moscow will still move to attack.
The reason for this is that a lot of money has been spent on its preparations in recent years, and Putin's words also take into account that NATO is a huge threat to Russia. That's why he's now cornered himself and has no other option, because he also has a lot of problems in his own country that he needs to distract people from.

Also, I think he is very overconfident too, because the Kremlin has not backed down from anything since 2008, when it occupied Georgia and its troops are still there.
It also has its army in Transnistria and recently increased its contingent in South Caucasus. It also supports the killing of the Bashar al-Assad regime and has not paid a price since occupying areas of Ukraine in 2014. That is why he is so confident, and adds that the West is not united in what sanctions should be imposed on Russia - whether it is a removal from swift, Nord Stream 2 or anything else."

It is already known that there will be unprecedented sanctions, including the launch of Nord Stream 2, one of the main tools of Russia's arsenal of influence, will this act as a deterrent to Putin?

As for the ban on arms supplies to Ukraine, Germany has such a law. I do not agree with this law, but it is the law and there is nothing we can do about it. I think there should be a public debate in Germany about the role this country should play in the world. The problem is that Germany is losing to us the moral authority it has built up over the last decades, when it has essentially stood by and quietly watched Russia undermine European values and ignore international law and the sovereignty of the European state. I don't understand how Germany can behave like this when Russia uses chemical weapons in an EU country and when it kills people in the centre of Berlin. I don't understand how Germany can not be outraged and try to take appropriate steps. "

As Anthony Blinken said, Russia is preparing an attack from three sides, there could be other versions, it is interesting to see you as a general if it comes to war, where the attack will happen, what tactics will Russia use, which has an unprecedented mobilization of manpower and military equipment.

"I think there will be Ukrainian soldiers fighting now and there will be Ukrainian people fighting. It will not be like it was in 2014. I think the Russians understand that, and they don't want them to lose a large number of troops because it will be impossible. To cover it up," said Secretary Blinken. That Russia can attack Ukraine from three sides: from the south, from the north to the east, from the Crimea to Kherson... They also have significant naval capabilities and can conduct amphibious operations, which I expect the most, but at the same time I don't think Russia will use all that at once. They will attack, they will try to stretch the Ukrainian forces as far as possible, so they can't focus on one point."

You mentioned the cyberattack in a conversation with CBS. Will Russia launch an attack in cyberspace first if it moves directly to military force?

"Cyberattacks will create difficulties for the president of Ukraine and the military command in controlling the situation and giving orders. That is the goal, of course, and it will also lead to delays in transportation. In addition, disinformation warfare will be used to sow panic among the people of Ukraine and, of course, to try to communicate this to the world in such a way that the Ukrainians themselves provoke and Moscow has no choice but to react. Also, the Black Sea Fleet will be involved and will launch missiles that will hit Ukrainian weapons depots, anti-ship artillery installations. At the same time, I don't think they will try to conquer all of Ukraine, because they can't do that and the situation is different, and they don't need to. They just want to show that they can go into any country they want, and if they can cut Ukraine from the Black Sea and overthrow the central government in Kiev, they will achieve most of their goal.

I also want everyone to understand that this is not just about Ukraine. Russia wants to change the whole international order and be in a better position. They are not interested in real negotiations, so they use chemical weapons, disinformation, cyberattacks.

And even sanctions, the information that America is going to deploy additional forces and military equipment in Eastern Europe, will not change cornered Putin's plans?

"I think we will definitely see an increase in armaments in Eastern Europe. I don't know exactly what it will be, but I really want to see more US air defence, logistics and other weapons needed to deter Russia.

So far the Biden administration has focused mainly on punitive operations after the invasion of Ukraine, and I think the best way to deter Russia is to show strength and military capability, and I think that's what the US is doing now by sending weapons to Ukraine and Eastern Europe. But I think the problem is that we don't have an overall strategy for the Black Sea region, which includes Georgia, Turkey, Romania, Bulgaria, Moldova and Ukraine. If we don't have this strategy, we will always wonder whether to give Ukraine the javelins.

Finally, what should Georgia do in this situation, what can we offer a friendly country at this time, what do Ukraine and the West expect from us?

"Georgians really need to pay attention to this story. I think it is not news to your viewers that Russia will always use force to prevent Georgians and Ukrainians from using their full potential in building liberal-democratic society. Russia fears a prosperous and successful Georgia on its border more than it fears NATO, so I hope that the Ukrainian and Georgian security services will exchange information.

Also, the Georgian government and the Georgian people should continue to strengthen the democratic institutions, as this is very important in the face of the threat from the Kremlin. Finally, I would like to say that if we had a unified strategy for the Black Sea region, we would now be conducting larger exercises in Georgia.